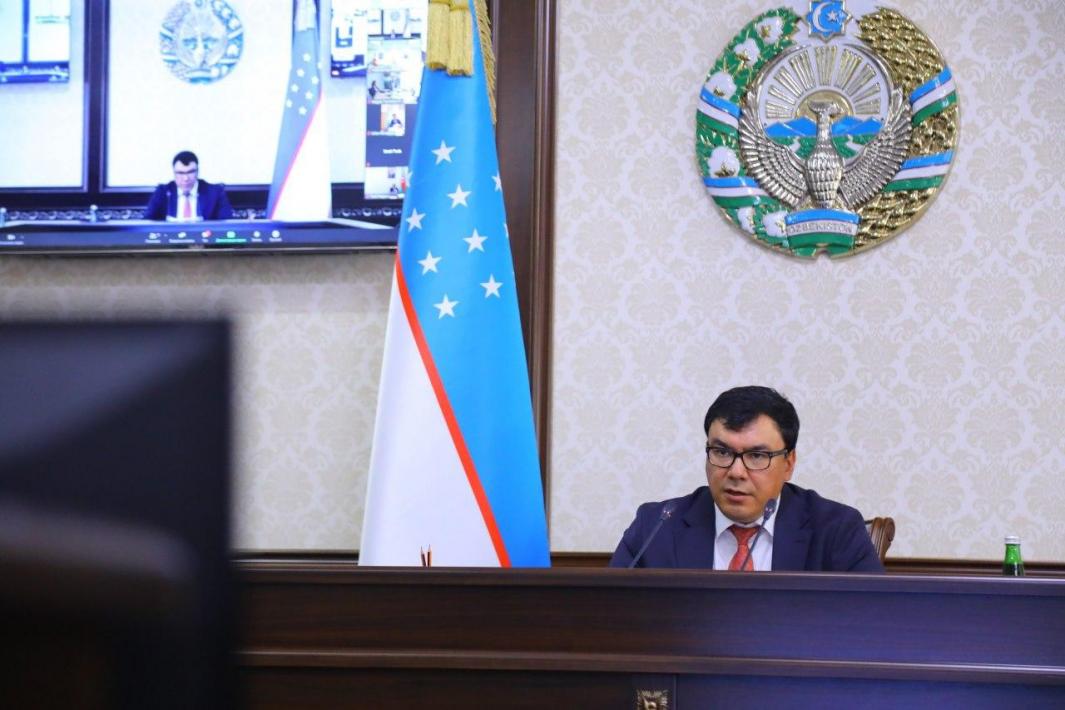 June 23 this year The V meeting of the Ministers for Tourism of the Cooperation Council of Turkic-Speaking States (CCTS) was held via videoconferencing. CCTS Secretary General Baghdad Amreev, Turkish Culture and Tourism Minister Mehmet Ersoy, Chairman of the Azerbaijan Tourism Agency Fuat Nagiyev and other heads of tourism administrations of CCTS countries took part in the online meeting of tourism ministers. Deputy Prime Minister of the Republic of Uzbekistan - Chairman of the State Committee for Tourism Development A. Abdukhakimov took part in the online conference from Uzbekistan.

For reference: President of the Republic of Uzbekistan Shavkat Mirziyoyev September 14, 2019 signed the Law "On the ratification of the Nakhichevan agreement on the establishment of the Cooperation Council of Turkic-speaking states (Nakhichevan, October 3, 2009)", and on October 15, 2019. in Baku, the Republic of Uzbekistan, represented by the head of state, took part in the seventh summit of the CCTS as a full member.

During the online conference, the participants were informed in detail about the work begun in Uzbekistan to accelerate the restoration of the tourism industry, in particular about the support measures determined by the Decree of the President of the country dated May 28 of this year. "On urgent measures to support the tourism sector to reduce the negative impact of the coronavirus pandemic" and the Resolution of the President of the Republic of June 19 of this year. "On additional measures for the development of the tourism sector in strict compliance with the requirements of the enhanced regime of sanitary and epidemiological safety."

The Deputy Prime Minister in his speech said that in Uzbekistan, in accordance with the installation of the President of the country, the tourism industry “learns to live and work” in a pandemic. Participants of the online meeting on the results of measures to combat coronavirus in Uzbekistan: as of June 23 of this year In total, 6,500 people infected with coronavirus, of which 70% have already recovered, and mortality from this disease is one of the lowest in the world - 0.3%, which is an important aspect in planning the reception of tourists in a pandemic.

Aziz Abdukhakimov informed in detail about the implemented tourist security system, in particular, about the creation of the Safe Tourism Fund, the launched sanitary and epidemiological security system of Uzbekistan. Safe travel GUARANTEED, provided an opportunity for business entities - participants in the system of free disinfection works in their tourist infrastructure facilities, as well as on the terms of compensation in the amount of 3 thousand US dollars in case a foreign tourist gets coronavirus during his stay in Uzbekistan.

The participants of the meeting were especially interested in the fact of use in the creation of the Uzbekistan system, cited in the speech of Deputy Prime Minister A. Abdukhakimov. Safe travel GUARANTEED scientific work of our ancestor, a native of sacred Bukhara Abu Ali ibn Sina, known in the West as Avicenna, who laid the foundations of epidemiology and quarantine a thousand years ago. Avicenna developed a scientifically based methodological guide for ancient travelers called "Activities for Travelers" ("Fi tadbir al-musofirin").

Aziz Abdukhakimov also informed the participants about the opening from June 1. for domestic tourism "green" and "yellow" regions of the country, as well as the resumption from June 15 of this year. air connections with foreign countries with the introduction of "green", "yellow" and "red" flights by risk levels based on the situation with the coronavirus.

The participants of the event highly appreciated the measures for the accelerated recovery of the tourism sector and the formation of new tools for its development, the provided benefits, preferences and incentives for the tourism business, the expansion of the "Open Skies" regime at the airports "Andijan", "Bukhara" and "Urgench", as well as incentive measures development of tourist infrastructure.

It should be noted that in 2019, of the 6.7 million guests who arrived in our country, 52% (3.8 million) accounted for the countries of the Cooperation Council of Turkic-speaking States.

During the introduction, the Deputy Prime Minister put forward a number of initiatives, the implementation of which will have a positive effect for all participating countries.

In particular, Abdukhakimov, mentioning his participation in the videoconference from the city of Namangan, noted that a native of this region, the famous poet and philologist Ishokhon Tura Ibrat, visited the territory of modern Azerbaijan, Turkey and the countries of Central Asia.

Based on the example of our great ancestor, today it is relevant to form combined tours in the footsteps of the great scientists of the Turkic world, which will facilitate the mutual exchange of our peoples.

As another example, it is proposed to start developing a cross-border tour that would cover visits to the mausoleums of Akhmad Yassaviy in Turkestan, the Zangiota Memorial Complex in the Tashkent region and Hakim ota Bakirgoniy in the Kungrad region of Karakalpakstan.

Also, the Uzbek side put forward an initiative to consider the possibility of creating a specialized satellite TV channel, which will promote the tourism potential of the countries of the Cooperation Council of Turkic-speaking states.

“We propose to form a single calendar of cultural events of the countries of the Turkic-speaking countries, within the framework of which to coordinate the organization of various festivals demonstrating the cultures and traditions of the Turkic-speaking countries,” Abdukhakimov said. He informed the participants about major festivals that have formed in our country in recent years, such as “Makom”, “Bakhshi”, “Festival of Folk Applied Arts”, as well as plans to organize the Festival of Khorezm Dance Lazgi in the city of Khiva and a festival of samples of ancient architecture in the city of Bukhara.

“It is also proposed to start the implementation of a joint project to improve the digitalization of tourism, including the creation of a common Internet portal with a Unified Map of Tourist Destinations of the Council countries, which will provide residents of our countries and potential tourists from other regions with detailed and reliable information about the history, culture, traditions and modern life of Turkic peoples, will allow placing virtual tours and excursions to increase the attractiveness of our tourist destinations for visiting, and using online guides and VR technologies, ”said Abdukhakimov.

During the online conference, the Deputy Prime Minister proposed expanding the geography, flight directions and frequency of flights, rail and bus connections between major cities of the Turkic Council member countries. In particular, it was noted that new directions of transport links between the historical and tourist cities of Turkey, Azerbaijan, Hungary and other participating countries will have a positive effect on the economies of our countries. It was also proposed to start the construction of modern "caravanserais" along the Great Silk Road to create comfortable conditions for tourists.

Emphasizing the rich historical and cultural heritage and the huge tourism potential of our country, the Secretary General of the Turkic Council expressed confidence that with the participation of Uzbekistan, multilateral tourism projects will acquire the necessary impetus for development. Secretary General Baghdad Amreev noted that all proposals voiced by the Deputy Prime Minister of the Republic of Uzbekistan will be included in the protocol of today's meeting.

As a result of the event, all participants in the video conference supported the initiative of the Uzbek side to hold the next, Sixth Meeting of the CCTS Tourism Ministers in Uzbekistan in 2021.