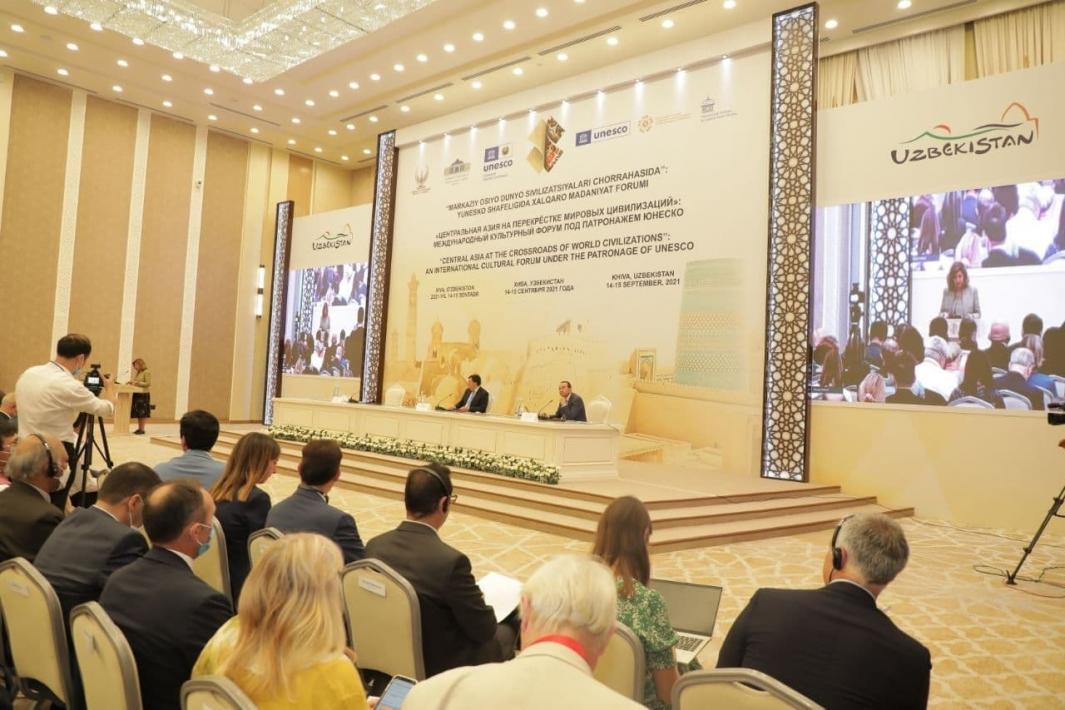 These days, the International Cultural Forum "Central Asia at the Crossroads of World Civilizations" is being held in Khiva.

The forum is attended by more than 500 guests from more than 60 countries of the world. In particular, representatives of such international organizations as UNESCO, ICOMOS, ICCROM, TURKSOY, honorary guests from foreign countries, experts, experts in the field of local cultural heritage, science, art and other fields, as well as media representatives were present.

Within the framework of the forum, together with the UNESCO World Heritage Center, an “International Advisory Committee on Cultural Heritage in Uzbekistan” was established. The event was attended by Deputy Prime Minister-Minister of Tourism and Sports Aziz Abdukhakimov, Deputy Director for the World Heritage Center at UNESCO Jyoti Hosagrahar, UNESCO Assistant Director General for Social and Humanitarian Sciences Gabriela Ramos, Director General of the International Centre For the Study of the Preservation and Restoration of Cultural Property (ICCROM) Webber Ndoro, UNESCO representative in Uzbekistan Alexandros Makarigakis, responsible representatives of the cities of Uzbekistan where UNESCO World Heritage sites are located, as well as members of the committee.

It should be noted that the activities of the International Advisory Council are aimed at further development of relations between the Republic of Uzbekistan and UNESCO in the field of protection, preservation, popularization and rational use of cultural heritage, preparation of proposals for the inclusion of the country's cultural heritage in the UNESCO World Heritage List.

As a result of the forum, an International Declaration was adopted, which voiced the main theses and global issues discussed at the forum meetings, in particular, the launch the “Khiva Process” that in collaboration with UNESCO will gather the region’s decision makers on regular basis to secure the sustainability of the outcomes and recommendations of the International Khiva Forum Central Asia at the Crossroad of the World’s Dialogue.

Also, within the framework of the forum, a presentation of the documentary film “Lyazgi”, shot jointly with the Ministry of Tourism and Sports, was held.

A concert program entitled “Khiva-the capital of the Turkic world” was organized in the Ichan Kala Museum-Reserve.

Today, on September 16, a meeting of the Permanent Council of Ministers of Culture of the Turkic World, an international organization of Turkic Culture, is scheduled to be held within the framework of the event. The meeting will discuss the issues of the report on the events within the framework of “Khiva - the cultural capital of the Turkic world”, the presentation on the cultural capital of TURKSOY in 2022, the election of the Secretary General of TURKSOY in 2021-2024.