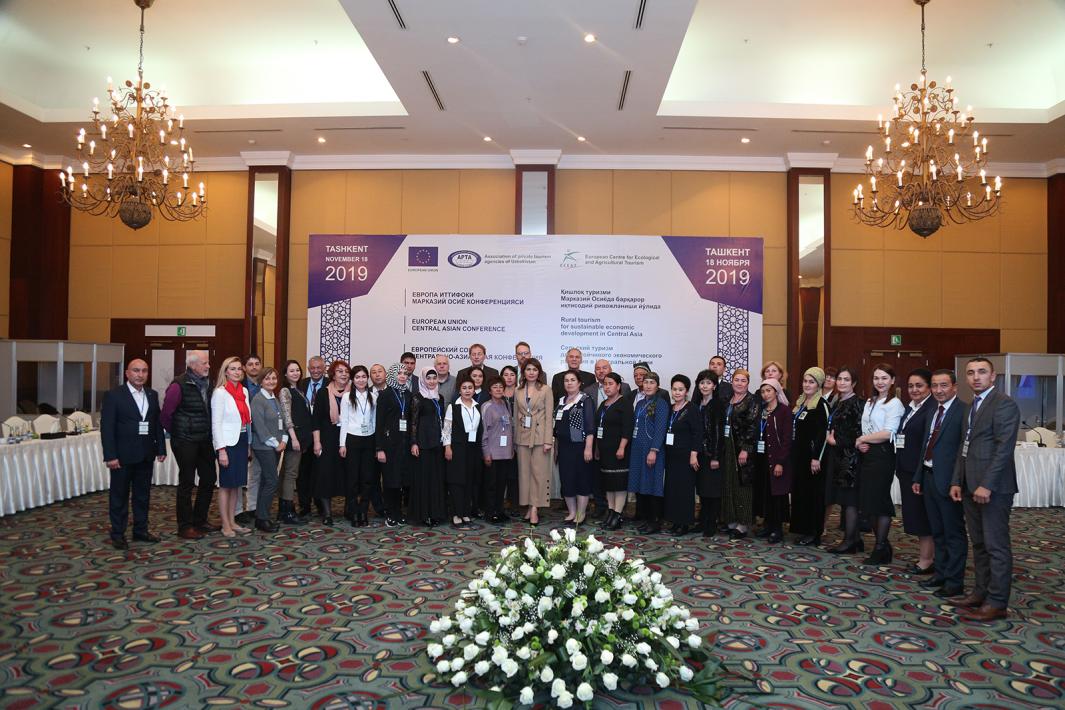 The European Union project «Strengthening rural and ecotourism through business associations for sustainable economic development in Central Asia» in the Republic of Uzbekistan has been successfully implemented by the Association of Private Tourism Agencies of Uzbekistan (APTА). And within the framework of the project, which was fully supported by the State Committee of the Republic of Uzbekistan for the development of tourism, it was possible to achieve great success and positive results. The EU project has given a powerful impetus to the development of CBT in Uzbekistan.

For the effective implementation of the project, a comprehensive plan of activities was developed, consisting of several components: information and promotion (website, brochure, manual, participation in exhibitions), educational (seminars, trainings) and a unit for professional development (networking, participation in the development of legislative acts).

The potential of CBT in Uzbekistan is extremely high and it is encouraging that for its effective implementation by the government all necessary efforts and measures are being taken. Of great help, which became a necessary and timely impetus in the development of CBT and guest houses in Uzbekistan, were the adopted legal acts: the Law on Tourism, the Concept for the Development of the Tourism Sphere up to 2025 and the Decree of the President of the Republic of Uzbekistan «On measures for the further development of the tourism Sphere» in the Republic of Uzbekistan.

It should be emphasized that the experts of APTA and the project specialists took an active part in the preparation of the above documents, where in each regulatory act special attention is paid to the growth of rural tourism potential in our country. Also, the APTA expert group took an active part in the development of the Resolution of the Cabinet of Ministers of the Republic of Uzbekistan «On the organization of the activities of family guest houses».

A high level of mutual understanding between business and government representatives is a key factor for positive change.

Within the framework of the implementation of the APTA project, the «APTA Networking Club» project was developed and launched for representatives of the tourism business, including owners of family guest houses. Within the framework of the «APTA Networking Club», representatives of government agencies and tourism businesses have an excellent opportunity to discuss in an informal atmosphere all the problematic issues that impede the development of the industry. It is the format with personal communication between entrepreneurs and representatives of government agencies that is the best opportunity to transfer projects and activities to the next level, as well as effectively solve painful problems and get competent answers to accumulated questions.

Within the framework of the European Union project «Strengthening rural and ecotourism through business associations for sustainable economic development in Central Asia», a special website, www.cbtuzbekistan.uz, has been developed for advertising promotion of family guest houses, where detailed information about each guest house is located with a demonstration of the location on the interactive map, the brochure «CBT in Uzbekistan» was also published.

For advertising purposes, CBT developed and approved the logo of CBT (guest houses) of Uzbekistan, which can form a recognizable image of rural tourism in the country.

Uzbekistan has all the necessary conditions and opportunities for the development and growth of popularity of CBT. The unique nature and rich culture, and most importantly, hospitality with us is an essential component of upbringing and behavioral stereotypes. For residents of our country, a guest is the dearest person and he is provided with the best conditions and forms the most interesting leisure.

The European Union’s project «Strengthening Rural and Ecotourism through Business Associations for Sustainable Economic Development in Central Asia» in the Republic of Uzbekistan was able to clearly demonstrate that in the near future Uzbekistan can become an attractive destination for rural tourism fans around the world.

Capacity building is directly related to increasing knowledge and competencies.

As part of the APTA project, a weekly training seminar program was developed, the participants of which were novice entrepreneurs who expressed interest and willingness to master a new type of business. The program of training seminars was aimed at increasing the level of knowledge and strengthening the participants’ potential for organizing work and successful management of guest houses.

The training program was extremely rich and informative, it also included topics of narrow specialization, which are important for the successful functioning of guest houses, such as introduction to tourism, the creation and management of a guest house, etiquette of receiving and serving tourists. All classes were held in an interactive form, with the active use of business role-playing games. Useful and applied publications have also been the focus of attention. Experts in APTA have developed and published practical guidelines for the creation and maintenance of the guest house «Guest House in Uzbekistan». Given the need to remove the language barrier, within the framework of the project, an «Uzbek-Russian-English phrasebook for hospitality employees» was developed and published.

Within the framework of the project, in order to develop CBT and guest houses, training seminars were organized throughout the republic, where 755 participants, owners of guest houses and potential owners of guest houses took part. Of these, 484 are women. Accordingly, the activities of the EU project were able to generate a cartoon effect. In addition to solving the problems of employment, raising incomes of the rural areas of the country, problems with gender issues are also being addressed. Because the direct beneficiaries of the growing popularity of CBT, for the most part, are women.

It should be emphasized that the educational component, for the entire period of the project, covered all regions of Uzbekistan. In some areas of the country with high potential in the development of CBT, training seminars have been organized many times. This is due to the fact that the number of people wishing to develop a new type of business in rural areas turned out to be quite high. They are attracted by the possibility of organizing and providing tourist services in guest houses. Moreover, in the Republic of Uzbekistan in recent years many steps have been taken and many measures have been taken that make the CBT segment extremely promising.

One of the tasks of all project activities is building networking. Networking involves the formation of business relationships, including the search for new acquaintances and the process of establishing contacts to solve your problems and profit. As part of the training process, participants not only received the necessary amount of knowledge, but also formed a business community based on the local community. In the segment of guest houses, built effective networking is especially important and useful. Thanks to the organized events in 24 districts in the regions of Uzbekistan, CBT communities are developing and actively functioning. All groups are active and ready for joint efforts to develop and effectively use the tourism potential of the regions.

Considering that the growing popularity of rural tourism is associated with many factors, APTA also organized seminars for tour operators, hoteliers, and government agencies, covering 320 participants (of which 224 were women).

Go to the site Back to events